For decades, because few oil producing areas around the world possessed the infrastructure to carry both gas and oil to market, the upstream petroleum business regarded natural gas as an unwanted byproduct of oil production. Whereas crude oil produced in even the most remote areas could be stored in tanks for shipping by truck, rail, or ship, gas in its natural state could not. As a result, over the years, trillions of cubic feet of gas have been separated from oil at the well site and burned off as waste.

But in recent years, improved infrastructure, growing public awareness of the environmentally friendly nature of natural gas, and improved technology for finding and exploiting gas reserves has made the one-time nuisance an attractive energy source, particularly in North America. 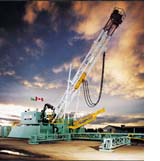 In response, and led predominantly by the Chicago-based Gas Research Institute (GRI), research efforts in the 1990s designed to shape technologies such as 3D seismic, horizontal drilling, and hydraulic fracturing to gas exploration and production has added trillions of cubic feet of gas to America's recoverable reserves.

3D seismic (back to top)
As with oil, arguably the most significant technological breakthrough in gas exploration in the 1990s has been the introduction of 3D seismic. (While technically possible for years, it was not until the availability of very large, high-speed parallel computers that seismic data analysis in three dimensions became practical for use in the petroleum industry.) The GRI reported, for example, that 3D seismic has been responsible for returning ten fields in the US Gulf Coast area to their 1970 production levels—an amazing accomplishment in an area which until then appeared to be in irreversible decline. In attempting to measure the impact of technological advances in the Gulf Coast, the GRI said that as a result of 3D applications, "in some cases, this reversal resulted in a restoration of production levels not seen in the past 25 or 30 years." 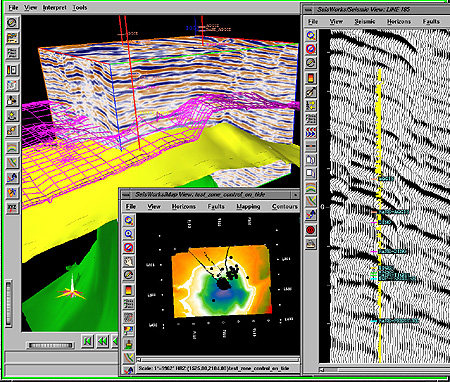 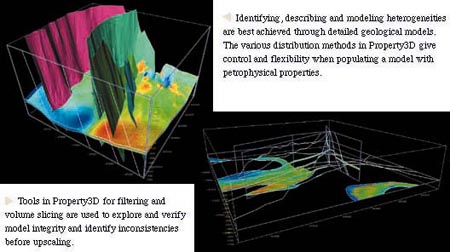 Three-dimensional seismic modeling is particularly relevant to the search for natural gas. Gas tends to gather in fault traps that are difficult to see in traditional 2D mapping. Even more discouraging from a risk point of view, it is very difficult to assign volume estimates to these highly compartmentalized pockets of reserves once they are seen on seismic and even harder if not impossible to determine whether the deposits are hydrocarbons or water.

With 3D, those uncertainties are lessened and the economic risks also significantly reduced in two ways. First, engineers can assume a greater level of confidence that they are indeed drilling into a hydrocarbon deposit of a size and value that can be reasonably well defined. And second, with a 3D view of the targets and a more precise picture of their boundaries and connectivity (or lack thereof) individual wellbores can be sited to optimize reservoir drainage efficiency and include targets once too small to justify the cost of a well. The ultimate result is a welcome but seeming contradiction: increased production rates even as inventories increase. 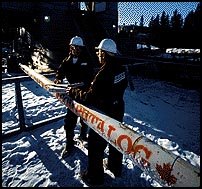 Several hundred miles inland from the Gulf of Mexico, since the late 1980s, oil men have been perfecting the techniques of horizontal drilling to exploit the Austin Chalk geological trend. The method was perfected in the mid-Texas play to pierce its strings of vertically fractured reservoirs with a single wellbore.

Because a horizontal well must pass through numerous zones that are often of descending or equal pore pressure, the wells must be drilled with low-density fluids to avoid fracturing or otherwise damaging the pay zone's productivity via fluid invasion or a thick filter cake. To that end, the Austin Chalk has become the laboratory for a practice known as underbalanced drilling.

Using the combination of horizontal and underbalanced drilling, significant amounts of gas, previously left behind because of the high economic and technological risks associated with entering highly permeable, low pressured, vertically fractured formations, are today being recovered from the Austin Chalk and elsewhere. The GRI reported, for instance, that the technique has added 40 billion cf of recoverable reserves to just one Austin Chalk field.

Tight Gas Sands (back to top)
At the opposite end of the geological spectrum from the highly porous and permeable Austin Chalk, are "tight gas sands", sandstones of less than .1 millidarcy. As might be expected, to recover these reserves economically, the hydrocarbon bearing rock must be artificially, or hydraulically, fractured to create a high-perm channel through which the gas can flow to the wellbore. Until recently, however, hydraulic fracturing technology was so inefficient that tight gas sands reserves were considered unconventional, that is available only at very high gas prices or as an alternative fuel source.

The problem was that, until the last decade, fracturing was a semi-crude practice in which sand-bearing fluids were pumped into the target zone at such a rate as to crack the stone and deposit the sand to hold open the fissure. Little was known about the mechanisms involved, so some fracturing operations resulted in considerably better production than others. It was an inaccurate science at best. 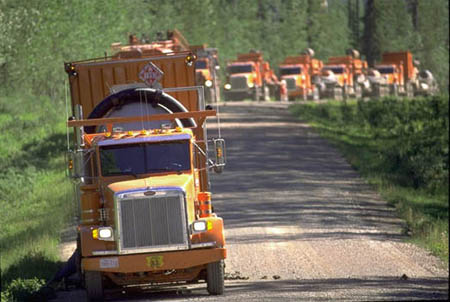 In the latter half of the 1980s and into the 1990s, however, the industry began to refine the practice of hydraulic fracturing. The introduction of powerful, affordable computers allowed engineers to interpret and measure in-situ stresses for the first time and thereby model fractures operations and predict their efficacy. New field-portable computers and sensors allowed on-site engineers to measure events downhole in real time and to more precisely control the rates and volumes of sand and fluid being pushed downhole.

Refinement of Hydraulic Fracturing (back to top)
Of at least equal importance to the refinement of hydraulic fracturing was an improved understanding of the fluids used in the operations. When fracturing sands, known as proppants, are carried into the fracture, they are held suspended in the transporting fluids by complex gels. Once in place, the sand must fall from the fluid to settle in the fissure and become the high-perm gas conduit between the formation and the wellbore once the induced pressure is removed. At the same time, the gels must "break," that is, they must go from complex to linear fluids that flow easily back from the formation to the surface so they do not become blockages to the flow of the sought after hydrocarbons.

In the 1990s, work done to trigger the gels breaking, based either on time or temperature, combined with better understanding of fracture technology, has doubled tight gas sand production in the USA from approximately one to two trillion cf/yr sine 1970. What was once considered an unconventional energy resource is quickly becoming mainstream—by the year 2010, the GRI estimates production will nearly double again to about 3.7 tcf/yr.

To reach that number, thousands of new wells will be drilled, particularly in the Rocky Mountains. To encourage that effort, GRI-backed research is being done not only on improving fracturing technology, but also on per-well drilling cost reduction through slim hole and coiled tubing drilling and higher productivity per well through better formation damage control and horizontal drilling practices.

Like gas locked in extremely low-perm sands, deep gas deposits geologists describe as anomalously pressured and compartmentalized, have defied exploitation. These pockets of natural gas occur at a depth of 7,000-9,000 ft in a second depositional layer beneath more normally pressured formations. Like tight gas sands, they are prevalent in the basins of the Rocky Mountains.

Since these hydrocarbons are found in compartments and can be over- or under-pressured, operators have shunned them as too risky despite estimates they could represent as much as 9,600 tcf of reserves in Wyoming alone. But just as it did in the Gulf Coast, the widespread availability of 3D seismic analysis along with improved sonic logging tools may hold the key to reducing that risk to manageable proportions.

The idea, as outlined by a GRI project aimed specifically at exploiting these troublesome reserves, is to determine the boundaries between the normal and anomalously pressured zones by detecting depths at which sonic and seismic velocity inversions occur. Then, using 3D seismic, geophysicists will pinpoint those areas of favorable porosity-to-permeability ratios (called "sweet spots") within the abnormally pressured areas.

Since the sonic data must come from wellbores that are irregularly placed, data voids occur over distances. However, 3D seismic data can be used to reduce the effects of those voids and thus turn the process into a powerful tool capable of greatly reducing the risk of exploration for anomalously pressured gas zones.

Gas transportation and distribution infrastructure is growing, particularly in mature oil E&P regions, while new oil reserves are being found in only increasingly remote areas of the world. At the same time, the public is beginning to comprehend an environmental advantage in natural gas, as reflected in at least two recent US Government reports on the subject. With improved exploration and production technology thrown in the mix, natural gas may well be the fuel of choice for the 21st century.