So familiar is the pump jack as an upstream petroleum tool, it is often used as a symbol on the covers of books about the industry and has been at least some part of the logo of countless oil industry companies and associations. Its high visibility stems from its long history as almost from the industry's beginning, some form of pump jack has been the artificial lift mechanism of choice on wells whose producing formations have become too pressure-depleted to lift oil to the surface on their own. As a result, the structures' bobbing horse heads, powered by prime movers that are fueled by electricity or field gas, dot oil country landscapes throughout the world.

As with all upstream petroleum industry tools, pump jacks have been constantly pressed for better efficiencies. Consequently, the newest generations of pumps are far superior to their predecessors in that they recover more oil in less time using less energy. Innovations in materials used to build the pump valves, for instance, give them longer life and reduce the amount of fluid that leaks past them to fall along the tubing wall back down the well (a phenomenon known as slippage). Such seemingly small advances are significant because they extend wells' economic life by at once reducing operating costs and adding production. Likewise, decades of experience now enhanced by computers have meant better modeling techniques so pumps today are better suited to their specific applications than were earlier installations.

Now, since the mid-1990s, as with nearly every segment of every industry, artificial lift systems, including the venerable pump jack are also benefiting from inclusion of "smart" technology. The computer-based technology is used to monitor and analyze pump systems in realtime from miles away, quickly and with minimal human interference. On pump jacks that means constant monitoring of well production and the lift unit in order to optimize energy usage while maximizing the amount of oil recovered from reluctant zones.

Theories of how to monitor and increase pump efficiency are not new. For many years operators have sent technicians around their fields with dynamometers, essentially strain gauges with recording capabilities. Sensors are attached to the pumping unit and record strain on the polished (top) rod that runs through the stuffing box of the well head and connects the pumping unit with the rest of the rods. While the pump goes through its cycles, trained eyes can judge from the resulting curve how efficiently the pump is performing at its current settings. If it was not pumping off all the fluid it should, or if slippage is occurring, or if any number of other less-than-desirable aspects to the pump's cycle are happening, it is revealed by a misshapen section of the dynacard, as the recording is known.

And while the system gives operators the necessary tools to improve individual pump unit performance (at least temporarily), it is time-consuming. "Historically, what you did was you put a dynamometer in a van and drove from well to well to generate a dynacard at each well site," said Weatherford Business Unit Manager, John Broussard. "And maybe you could do five a day."

In fields that sometimes include thousands of wells, however, the ability to check only a few of the most important wells a day is just a little better than nothing. Indeed, experienced field hands learned to rely on the touch of a hand on a polished rod or the sound of the pump prime mover to diagnose such problems as parted rods and premature pump off, even such subtle problems as a leaking valve. 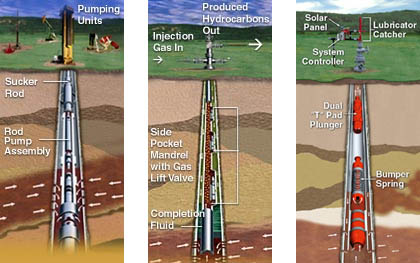 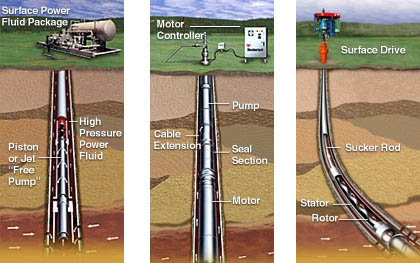 New technology
But thanks to modern hardware, telemetry and software, operators today, says Broussard, can check many more wells per hour than they could once diagnose per day. "With the proper software and the electronics on the well site you can get dynacards all day long and look at 300 in a matter of an hour or so," he said. "A skilled technician can go right through them and zip right by the ones that are very normal looking. When he gets to something that looks abnormal a trained eye would know to stop [going through the cards]." And when the abnormal card is recognized it can be more closely analyzed and a solution devised without wasting an inordinate amount of technician time on performing units.

And with some additional tools, even a less-experienced technician can handle much of the job. "There is also software available today that have an auto analysis tool that will actually do an automatic comparison of a card to a database of cards and it will generate an opinion as to what is taking place in that well," Broussard said. "So even an unskilled technician relying on the software to tell him what the well is doing can go through the wells pretty quickly."

The monitors and software packages currently available make much more information available to the operator than was attainable from the old dynacards. Controllers and monitors on the unit relay, in real time, the performance of both the unit and the well. "The data is much more advanced than a [dynacard]," Broussard said. "The information is relayed to a software system that would include stronger analytical tools for the customer to evaluate in real time the performance of the pumping unit. It is structured to do that in a time-efficient manner." The software could be configured, as one facet of its analysis, to develop a dynagraph from the data and then to compare that to older cards stored in memory to add to the historical track record of the well.

When problems are discovered with the pumping unit using modern software, they are usually such that the solution is suggested immediately by the data. For instance, if the data suggests a valve is leaking, the only decision is to live with the lost production or to "pull the well", that is do a workover to replace the offending part. Or if the unit is out of balance, it is a matter of moving counterweights, or if it is pumping off too quickly the solution is to either slow the unit or allow it longer down time between pumping cycles.

But in some instances the solution can be automatic. If an operator does not wish to have the well not pumped completely dry before allowing more fluid to enter the well bore (pumped off), for instance, the pumping unit can be controlled by software settings. "Specifically, in that case, the rod pump controller is not functioning on time, but on fluid level," explained Broussard. "If it took three hours to pump it off the first time that is not really bearing on the next time. Now there are other ways to pump a well where you can actually put devices on the well that will adjust the speed of the unit to maintain a minimum fluid height. You essentially try not to pump off. You just slow the unit."

Smart well technology is of particular importance to the US where a very large portion oil is produced from thousands of stripper wells producing less than 10 b/d. Many of those wells have reached such a depleted pressure state that once they are shut in they can never be economically restarted and the majority of them are being kept alive by pump jacks. By improving pump efficiencies without adding significantly to operating costs, smart well technology stands to extend by years the economic life of many of these wells and, by extension, add millions of bbl of oil to US reserves.