Although the company had said it might monitize any of its holdings if the right opportunity arose, Ramco Energy's sale of its interest in the Azeri-Chiraq-Guneshli Field (ACG) to Amerada Hess for $100 million (US$150 million), nevertheless, came as a surprise move. It was the first international oil company to enter the Caspian since the 1920s and a founding partner in the Azerbaijan International Operating Co. (AIOC), developer of the super-giant ACG Field. Its chairman and CEO, Steve Remp, first visited Azerbaijan in 1989 to find vast resources yet to be developed, and was instrumental in attracting western investment in the Azeri Field, later part of ACG. Thus sale of its 2.082% interest in the PSA was unexpected.

In the years since its matchmaking, Ramco has played a key role in Azerbaijan's developing petroleum industry, first as a member of the AIOC consortium, then in development of the deepwater portion and enhancement of the shallow water portion of the Guneshli Field, and, more recently, in the rehabilitation, exploration, and development of the Muradkhanli, Jafarli, and Zardab onshore fields. 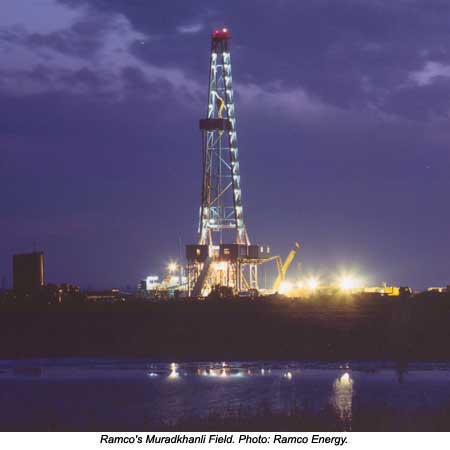 Asked about the early oil project from the Chiraq 1 well on ACG, Burchell said that it is running now at about 110,000 b/d, but that the output is expected to increase. "The water injection project is about 90% complete and will soon be started, so production is expected to be pushed up by the end of the year, as we get the gas flaring down. The problem there is that Socar [State Oil Company of the Azerbaijan Republic] can't take all the gas we're producing now, so BP Amoco & Statoil have concerns about flaring. The efficiency of the early oil project is high, as well. The western export route is running well at this time, and there are plans to add a couple more pumps on the line so it can handle a bit more oil."

Pipeline export routes(Back to Top)
"Transportation is the key to everything," Burchell said. "We have to be pretty certain that, by 2004, when many of the Caspian region projects are projected to come onstream, there will be a sufficient export capacity. For example, the new Kazakhstan Kashagan discovery seems very large and will likely dominate transportation for some years to come. If one believes the size that is being talked about, it alone will require more than the capability of the Baku-Ceyhan pipeline—talk is that Kashagan could be producing 2-3 million b/d, if one believes the forecast of the reserves. And then there's BP's Shakh Deniz discovery, which is a whole other problem, a rich gas development without a plan for export."

Where does Burchell see ACG's and Shakh Deniz's gas market being?
"Turkey," he answers. "The gas market is not in this area, but in Turkey. The gas we know we have in ACG and the gas from Shakh Deniz will satisfy the Turkish market for many years. I'm predicting that most of the discoveries found south of Baku will be gas, whereas those to the north will be oil."

What of Turkmenistan's gas and the prospect of a trans-Caspian pipeline that could tie in at Baku?
"Technically, to build such a pipeline across the Caspian would be complicated," he said. "Turkmenistan sits on a huge reservoir of gas, but it is mostly in its east, and its gas market probably will be, too. It doesn't have that much oil here on the western side, either, nothing that Iran can't handle. Turkmenistan's problem is that it has to go through Kazakhstan, which has a lot of its own oil, to get to European markets. And, then there are the political messages from Kazakhstan; they want more to go through Russian territory.

"There are plenty of potential routes out of the Caspian to world markets, but ultimately there will be three routes: the Baku to Supsa, Baku to Ceyhan, and the CPC line to Novorissysk, which will make a good tie-in for Lukoil's new discovery south of Astrakhan. A million b/d will be going to Ceyhan from ACG.

Shallow Water Guneshli(Back to Top)
The shallow water sector of the Guneshli Field was discovered in the early 1980s, went onstream in 1985. It holds some 700 million bbl of recoverable oil reserves, despite producing about 120,000 b/d since then, some 40% of Azerbaijan's total production. Socar has worked hard to keep production at that level, but is in need of significant investment to recover existing oil that is in slightly deeper water and is unreachable from existing platforms and wells, particularly to utilize water injection to increase the capacity of existing wells. 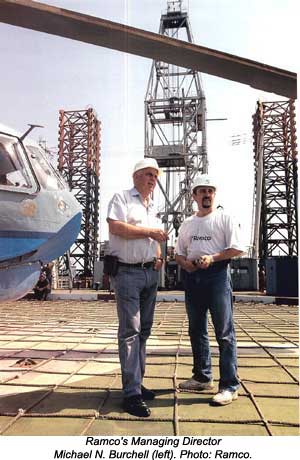 Ramco has held rights since 1992 to match any contracts that might be negotiated on this field, and has formed an alliance with TotalFinaElf to negotiate a field development contract with Socar. "We hope to finish a sound technical model for the development of the Shallow Water Guneshli region by the fall, and, hopefully, by the end of the year, we will negotiate a development package with Socar," Burchell said. "If all goes well, we'll have production in three years, about 2004."

Georgia's Kaheti Block(Back to Top)
Ramco obtained a PSC for Block X of the Kaheti prospect in 1997 and has completed a 2D seismic survey over 202 km of the block, which is now being interpreted. In addition, the company is evaluating existing fields for further development and possible early oil.

Burchell says there have been oil seeps in the foothills within the block for hundreds of years. "The Kaheti Block is very interesting because it is in the heartland of Georgia's wine industry, where the world's wine industry started. Companies have been there for years trying to find where the oil seeps are coming from, but without success, because they did it with surface geology, and this is an overthrust play like the western Rockies and Apalachians.

"We've found a lot of potential there both shallow and relatively deep. These are geologically quite different plays from those that have been exploited in Georgia before, such as those around Tbilisi, the big fields such as Sangori. There's really an extension of the Eocene basin coming up from Azerbaijan—Muradkhanli is a part of that big basin—and there is a deep Jurassic thrust over that.

"We've just finished surface geology to tie the structures. We've also found in the main valley area relatively shallow seismic anomalies, which we're working on. Going back to the local farmers who've drilled water wells and had oil come out of the wells. There's a lot of shallow potential there, too, which we're looking at. We're building up a good technical base. It is an area which was totally ignored by the Soviet Union. It's a beautiful area of the world, too. We have great hopes for it."

Azerbaijan's largest onshore field(Back to Top)
Muradkhanli is potentially the largest onshore field in Azerbaijan, with estimated oil in place of approximately 5 billion bbl. It lies about 70 miles west of Baku near the rail oil export line to Tblisi and Sepsa, Georgia and is strategically located near the planned Baku-Ceyhan main export pipeline route.

Under terms of the PSA signed in 1998, Ramco holds a 50% interest in the field with an affiliate of Socar holding the remaining 50%. The contract area covers three proven oil accumulations: Muradkhanli, Jafarly, and Zardab, where Socar originally found some 3-5 billion bbl of oil in the field, and has produced over 22 million bbl to date, mostly from the Upper Cretaceous reservoir horizons. But production has fallen to less than 10% of the original dayrate, despite the state oil company's efforts to keep the field in operation for so long with so little resources. (See "Ramco Discovers Oil at Muradkhanli, Onshore Azerbaijan".)

Ramco's Muradkhanli Operating Company (MOC) operates the project as a rehabilitation, exploration, development, and production sharing agreement. Phil E. Maxwell, MOC president, says that Socar was not able to exploit Muradkhanli's Middle Eocene reservoir because of completion problems—it is a reservoir prone to produce solids and is an high pressure play. Traditionally what happens is the chemical problems in the hole causes collapse.

"Our mandate is to drill the well quickly and complete it in such a way to prevent or inhibit the solids production and to sustain the production volume as well. Our strategy is to drill the well where previous Socar wells showed high productivity on test but difficulties in producing the well. So it's a risk project, but not in the sense that the oil or source rock or the trap needs to be proven. The risk here is the difficulty in completing the well to sustain the production—an engineering risk." 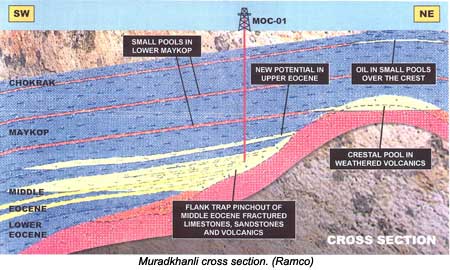 MOC's new well (MOC-01) is only 75 meters from the previous well (Muradkhanli-208), which was drilled in 1980 and produced on DST up to 2,100 b/d, but soon became clogged due to mechanical difficulties. MOC-01 was spudded in January, drilled down to 4,567 meters, and logged, whereupon a significant oil column was identified in the fractured Middle Eocene limestones, sandstones, and volcanics, as was expected, and an unexpected additional play in the Upper Eocene fractured clastics. A number of attractive fractures were also found in the rock, but when it came to running the seven-inch line to complete the well, problems thwarted further completion. There was an attempt to complete the well through the drillpipe, but a tool was dropped and it was abandoned. (See "Ramco Sets Casing on First Azeri Onshore Well".)

MOC then decided to sidetrack this well, which commenced in mid-June, with drilling through mid-July. Considerable flow is anticipated on tests, but sustained commercial levels of production have to be verified. Seismic is scheduled for the field, then a few appraisal wells so that, by the end of 2001, there should be a clear picture of the extent of recoverable reserves. Known already, however, is that it will require considerable fracturing throughout the field, and extensive horizontal drilling. By 2002, if appraisals are successful, a comprehensive field development program will be put in place covering both the Rehabilitation Area and the new Exploration Area, with potential oil production in excess of 100,000 b/d of oil.