Electronic Power Design, Inc. (EPD) of Houston, Texas recently shipped the first of two identical control systems that will be used in two Global Marine drill ships that are now under construction in Belfast, Northern Ireland. These two ships, named the Glomar C. R. Luigs and Glomar Jack Ryan respectively, will be capable of drilling in water depths of over 9,000 ft. The first control system was destined for the Glomar C.R. Luigs. The second, for the Glomar Jack Ryan, is complete and delivered to Global Marine Drilling for transport to Belfast.

The control systems will handle the drilling operations and automated pipe handling. The control for the drilling operations is being shipped directly to the shipyard in Belfast; whereas the pipe racking control system will initially be furnished to EPD's OEM customer, Oil States (Skagit/SMATCO of Houma, Louisiana). EPD will integrate and test the electrical systems for them, after which , the completed automated racking system will be forwarded to Belfast, then perform the final commissioning of the combined electrical systems in Belfast.

The ships are being built in response to 30-month leasing contracts with BHP Petroleum from Global Marine, with an option for leasing the vessels for two additional years. Actual drilling operations will begin during the first quarter of 2000 in the Gulf of Mexico with the Glomar C. R. Luigs. Drilling operations with the Glomar Jack Ryan are scheduled during the third quarter of 2000, also in the Gulf.

The ships use a Glomar proprietary dynamic-positioning system (DPS), a combination of global positioning system (GPS) and short baseline (SBL) acoustic positioning system. The acoustic system provides back up in the event that the satellite signal is lost. The DPS provides the ship with the ability to hold position with only about a 10 ft variation from the drill site. Nautronix is supplying both the GPS and acoustical apparatus. There are a total of six azimuthing thruster engines, each 3700 hp in size. One is located in the bow; one in the aft; two forward; and two in the stern.

Once the ship's master determines that the ship has been accurately positioned over the drilling site, a series of calculations relative to the position of the ship are made and the setpoint is then programmed into a satellite console by the bridge officer. Thereafter, the DPS computer receives the coordinates of the ship position as "seen by the satellite" during continuous position samplings. The satellite position feedback is compared to the programmed setpoint. Adjustments by the thrusters are made in response to position coordinate variations that fall outside the setpoint.

The EPD-supplied control systems for both the drilling operations and pipe handling were built to American Bureau of Shipping (ABS) Class III standards. This is the highest standard currently available among leased drilling ships and implies a high degree of redundancy.

Control for the Drilling Operation
The drawworks uses four load-sharing shunt wound dc motors (totaling 5,000 hp) for the vertical motion of the pipe string. The EPD controlled drawworks must be capable of hoisting loads of 75,000 tons. The 750-ton top drive provides the actual drilling motion. The rotary table provides a backup for the top drive and is also used for building pipe stands. This process is explained in more detail later. The drawworks is load shared with fiber optics since two drives are on one side of the ship and two are on the other side, which prevents noise (EMI) from disturbing the load-sharing signals.

Drilling mud provides the hydrostatic pressure, prevents the entry of formation fluids into the well, and carries the crushed rock to the surface. There are four National 14-P-220 mud pumps that feed the mud to the bottom of the borehole. The mud then leaves the drill pipe through the bit and is pumped to the surface. At the surface, the mud is screened and then re-circulated. The mud pumps are reciprocating, positive piston displacement and must be synchronized (load-sharing) for proper operation and prevention of possible internal pump damage.

The control for all the above motors and pumps were built by EPD using Siemens SIMOREG 6RA24 dc drive controllers. Each of the drives has its own field supply controller. All of the drives are speed-regulated which means that they use as much armature current as necessary to achieve the set point.

Control logic being fed to the drives, pumps, and HMI (human machine interface) is supplied by Siemens S7-400 as master and S7-300 programmable logic controllers (PLCs) as slaves. EPD was the first to use this advanced hardware for application in offshore drilling with the introduction on the Glomar Explorer drillship and the Glomar Celtic Sea drilling platform, also built by Global Marine. A redundancy scheme is used to assure continuous operation. Where possible, the system uses ET-200 distributed I/O units. The use of ET-200 remote units provided significant savings by reducing wiring cost and labor, as well as saving valuable ship space. 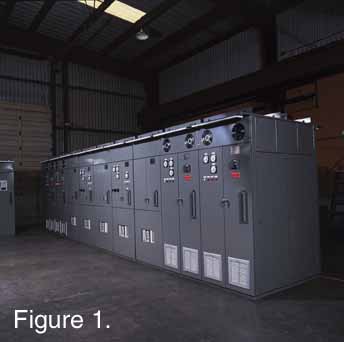 Like the PLCs, the drives use redundancy to assure continuous operation of the drilling and mud pumps. Observing Figure (1.), you see the redundant control cabinet scheme. One line-up is a mirror image of the other. The HMI for the drive line-ups consists of a Siemens OP37. Switching to any of the spares or backups simply requires using the rotary switches directly beneath the HMI in the same control cabinet. The HMI reports equipment control and status, provides alarm information, and aids in pinpointing problems should they occur. The critical nature of keeping the drives and pumps continuously running necessitates a reliable and fast field bus system. The EPD-supplied control system connects all the controls via optical links through PROFIBUS using Siemens communication modules and the built-in PROFIBUS readiness of the Siemens drives. The PROFIBUS network operates at 1.5 Mbaud. As far as EPD knows, they were the first in the industry to implement PROFIBUS protocol with Siemens S7 PLCs and Simoreg drives.

To assure that "the hole" is always preserved, EPD also installed analog speed control pots on the all of the drilling operation drive cabinets. This allows the personnel to operate the system manually during an emergency.

Automatic Pipe Racker Control System
The two pipe racking systems are being built by Oil States-Skagit/SMATCO in Houma, Louisiana for later shipment to Belfast. The controls, drives, and motors for the entire system are being integrated by EPD. The joints, complete with collars are initially stored in the vertical racking storage area before they are built into stands and transferred in the horizontal pipe racking (HPR) area. The process for building the stands and transporting them to the HPR storage area is as follows:

A crane removes the joint from the vertical rack area. This is transported via a set of motor-powered rollers (called the skate) along some rails upon which fits a cart that is also motor-driven. Once the cart gets to the rotary table, the pipe is "kicked out" and the vertical lift and horizontal travel cranes work in concert to upright the pipe vertically above the rotary table. A stabber mechanism grabs the pipe from the side and steadies the pipe to keep it from swinging during this process. Roughnecks on the deck manually guide the pipe into the rotary table where it is engaged for adding the other sections.
This process is repeated for a second and third time, with the two successive pipe sections stabbed into the collar of the first pipe and then torqued by the rotary table. These three sections of pipe complete one stand. The stand is then removed and stored in the horizontal pipe racking storage slots called "sleepers". The building and storage of the stands takes place before the actual drilling of the hole. It can be performed while at dock or at sea. Initially it is performed dockside, and then the process is repeated at sea when moving from one drilling site to the next.

Once the ship is in position over the drilling site, the initial preparation for drilling the hole takes place. An initial hole is drilled and temporarily kept open with weighted mud. Then the casing is inserted. This is followed with the cementing around the casing to build the wellhead. Then the riser sections are inserted into the hole with the initial section lowering the blowout protection system (BOP). The risers are then put into place. These will provide a stable cavity into which the pipe string and drill bit are inserted. As the hole goes deeper and deeper, more and more stands of pipe are added to the string.
EPD is providing the overall control for handling the pipe sections as they are being made into stands, handling the assembly of the risers and insertion into the borehole to build the wellhead, and then controlling all the horizontal pipe racking operations for building and adding to the pipe string during the drilling process.

The control is repeated redundantly for the vertical lift and horizontal travel and placed on a second backup crane. (See Figure 2.)

All the motors use drives built by EPD utilizing Siemens dc drive controllers and receive I/O logic via S7-300 programmable logic controllers with the S7-400 being the master PLC. All the drives have four-quadrant operation capability (as opposed to using reversing contactors) to provide the motors with the capability to run in the reverse direction very quickly. The position of the pipe during movement via the vertical lift and horizontal travel is very critical; therefore these motors are equipped with high resolution encoders to provide the necessary six axis motion control and closed-loop feedback required for the drives.

Like the control sections for the drilling operation, all of the automated racking system drives have analog pots for manual speed control backup. In an emergency the cranes can be operated manually via an operating panel. Communication between all the drives and PLC's is via the PROFIBUS network mentioned earlier.

Conclusion
In addition to being one of the deepest drilling ships available, the two new Glomar drillships will provide a number of other industry firsts. Optically coupled load-sharing for the drawworks is a first. Also the riser tensioners are rated at 250k, another industry first. High-resolution, four-quadrant drive-controlled pipe racking is an industry first as well.

In any story about innovative ships, it would be remiss not to mention Glomar Marine Drilling's ship the Glomar Explorer, which was originally built by them and introduced to the world as a deep ocean mining ship built at the direction of Howard Hughes to mine manganese nodules on the ocean floor. This turned out to be a CIA cover for the true mission, which was to recover a soviet submarine, sunken at water deeper greater than any conventional technology could reach. While all of the details are still not available, it is generally believed that the Glomar Explorer did, in fact, recover parts of the submarine which contained nuclear warheads and other valuable secret information. No longer a spy ship, and now operating as a deep ocean oil drilling ship, it is now part of Global Marine's fleet of four sophisticated deepwater drill ships. The months and years ahead will make way for two new names that will make their own history of another kind—Glomar C.R. Luigs and Glomar Jack Ryan.