According to industry analysts Douglas Westwood, the floating production market could enjoy a rapid expansion within the next five years. Currently standing at 112 units, estimates suggest this could rise to 144 vessels by 2005. Floating Production Storage and Offloading (FPSO) vessels account for approximately half the total floater population.

At present, a total of 64 FPSOs are currently operating and a further five are available for leasing. Almost a third of these are employed to produce from fields, mostly in the UK and Norwegian sectors of the North Sea, while over a quarter are based in Asia (eight in China, three in Indonesia, two each in Malaysia, Thailand, and Vietnam).

Africa is also a growth region for FPSOs. Currently there are 12 operating—10 in West Africa and two in the Mediterranean sub-region. The other two principal regions are Australasia with eight and Latin America (Brazil) with seven. 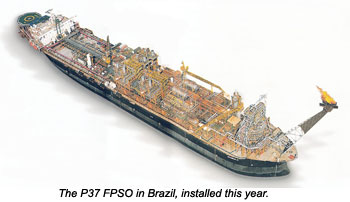 Notably, the FPSO has not found favor with US operators. This is partly due to environmental concerns, well developed production and pipeline export infrastructure and the prevalence of gas developments in the region, which are better exploited through dry completions on fixed platforms with larger topsides. Nevertheless, as production advances into deeper waters which could be remote from any export infrastructure, pressures for the introduction of offshore storage and loading inherent in FPSOs become stronger.

One of the principal inherent advantages of FPSOs is that they are particularly suitable for developing marginal fields. Once depleted, the FPSO can be transported quickly to another accumulation. The Petrojarl 1 planned for Kvitebjorn in Norway, for example, has already been used on Angus, Hudson, and Blenheim in the UK.

A single operator however might not have a suitable field in its portfolio. An alternative, therefore, might be for an operator to lease an FPSO from a third party contractor rather than own the facilities outright as is common with more fixed platforms. At present, FPSOs are roughly evenly split into operator-owned and contractor-owned.

Another trend has been the increase of the converted vessel over the newbuild FPSO. Of the 69 FPSOs available, 41 are conversions and 28 are newbuilds. This is due to a number of factors, not least the low price in the second hand tanker market some years ago.

The biggest FPSO operator is Petrobras with eight floating production units working on its Campos Basin fields. The forecast is to complete 14 units (FPSOs and FSOs) by 2003. This year two FPSOs on Marlim and Espadarte came on stream. Marlim is currently being developed by 132 wells feeding into eight floating production units. The most recent FPSO to come onstream is the Petrobras P-37, which was converted from the tanker Friendship. It has a process capacity of 150,000 b/d oil. The 285,000 dwt vessel on Espadarte lies in 800 meters water and has a storage capacity of 1,900,000 bbls. It can accommodate up to 45 risers including umbilicals and electrical cables in the bow turret.

In Australia, BHP's Buffalo Field also came onstream earlier this year. Buffalo is located in the northern Timor Sea, with Laminaria 12 km to the northwest. The FPSO used to develop Buffalo was originally built in 1976 as the 105,000 dwt merchant tanker Spirit. The FPSO was converted at the Jurong Shipyard into the Buffalo Venture. It has a length of 288 meters, a beam of 39 meters and a draught of 15 meters. 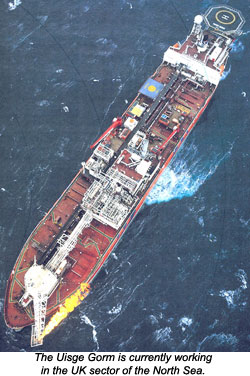 One of the most recent examples of a West African FPSO is on Triton Energy's Ceiba Field located in Block G of the Rio Muni Basin, 22 miles off the continental coast of Equatorial Guinea. Triton has signed a multi-year FPSO leasing contract with Bergesen. The 275,000 dwt turbine tanker Berge Charlotte is being converted in the Jurong Shipyard in Singapore. Originally a VLCC, it measures approximately 350 meters (1150 ft) in length and 52 meters (170 ft) in width. It has an oil storage capacity of 2 million bbl.

Technical innovations
Since its inception, the FPSO has gone through a state of evolution rather than revolution, although Conoco made a notable departure from the conventional design in 1998 with the first use of the Ramform hull design as a floating production system for its Banff Field in the North Sea. The hull, 395 ft long by 175 ft wide, has a characteristic delta shape, for a large load-bearing capacity and stable work platform. The newbuild double hull has a storage capacity of 120,000 bbl.

Most FPSOs however, are converted from or build along the designs of tankers. Most of the recent designs are large to maximize field economics. The 154,000 dwt Schiehallion FPSO is 246 meters in length and the 97,000 dwt Norne FPSO is 260 meters in length, while the Laminaria is 273 meters in length and has an oil storage capacity of some 225,000 m3 (1.4 million bbl). 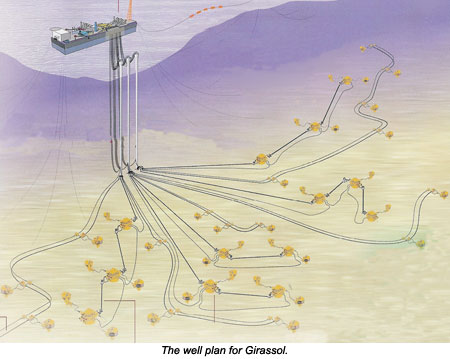 One of the main limiting constraints to throughput, however, has been the number of risers that can physically fit through the turret and into the vessel. One interesting technical development, therefore, has been use of mini-towers on TotalFinaElf's Girassol FPSO.

Girassol is located about 210 km NNW of Luanda, Angola. It lies in 1350 meters of water and will be developed using a subsea facility tied back to an FPSO. Girassol base case reserves are estimated around 700 millions of bbl. The field is being developed by 39 wells feeding into 13 manifolds. Instead of entering a turret, they are routed into the bases of three 1300-meter-long riser towers. A catenary line links the FPSO with the tops of these towers. The climate in West Africa is so benign that there is little movement of the FPSO. The oil lines can therefore enter the FPSO in connection points located on the side of the vessel, obviating the swivel.

At over 300 meters long and 60 meters wide, Girassol will be the worlds largest FPSO. It can produce oil at 200,000 b/d and can store 2 million bbl of oil. The hull features a double-sided construction with 12 ballast wing tanks measuring 7 meters wide as well as two forepeak and two aft peak ballast tanks. In total, it has 12 cargo tanks. Current deadweight is 343,000 tons, which includes 98% of cargo capacity and 50% of slop tanks.