Industry Closing in on Components for Intelligent Completions 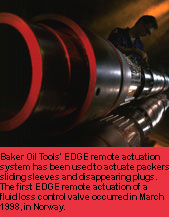 In November 1999, Schlumberger announced it had installed "intelligent flow control equipment below an electric submersible pump in a well in Wytch Farm, UK for BP Amoco." At the end of January, Baker Hughes said it was pooling about 80 people from its various divisions to focus on "providing a complete range of intelligent completion solutions."

The timing of these events is significant. Two years ago, before the last oil price slump, intelligent completions (IC), or smart wells, were the technological topic of the day. But after a few rudimentary, problem-plagued installations in the North Sea, industry enthusiasm for such installations waned.

Now, as the necessary technology matures and prices recover, operator appears once again to be turning to these high-tech completion strategies. Likewise, as the major service companies' merger and acquisition fever seems to have at least temporarily subsided, they are once again committing to IC development.

Completions become intelligent when they include, at a minimum, surface controllable, downhole flow control valves that allow operators to select the zone to be produced. Actuated via an electric signal to a hydraulic motor, these valves have evolved from the decades-old technology of sliding sleeves installed across perforations opened and closed with wireline or coiled tubing tools.

Initially, operators realize cost benefit from IC through the ability to change production zones with little more than the flip of a surface switch thus eliminating intervention costs that can doom a project's economics outright.

In a similar vein, even when a secondary zone of interest may be of sufficient size to justify an intervention, the elimination of rig-related operation and capital expenses, can extend the economic life of the zone substantially. As such, an IC can actually add to a company's reserves base.

The Schlumberger Wytch Farm installation, for instance, was performed on a dual lateral completion drilled after the original wellbore prematurely watered out. The IC allows BP Amoco to control production of either lateral from the surface. Schlumberger reports that production gains from the well are estimated at more than 500,000 barrels and that "the savings in future operational costs will be considerable."

Since Wytch Farm wells are so complex, the cost of a traditional intervention could well have scrapped the project and left those half-million barrels to join the millions around the world known as "stranded oil".

What's more, without IC, operators can be further discouraged from doing recompletions such as the one done at Wytch Farm because they leave no option to the risk-laden intervention later in the well's life. It is a consideration that looms large when planning to re-enter highly deviated, long-reach wellbores that are the norm at Wytch Farm and, increasingly, elsewhere. 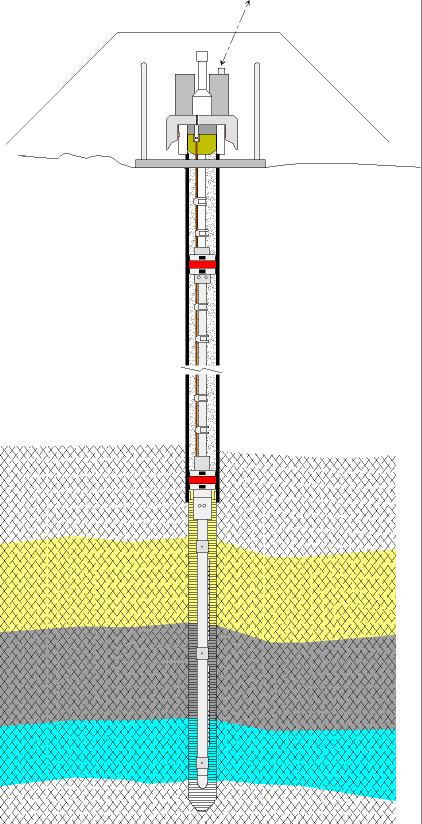 The ultimate quest of IC proponents goes beyond mere flow-control. Rather, they envision a field-wide system that monitors and regulates itself constantly in order to optimize production. In this futuristic vision, data from permanent downhole sensors that read such essentials as flow rate and pressure is fed to the surface. Computers then analyze that data against pre-programmed models to calculate the exact best mix of production from all the zones throughout the field. Once that decision is made, the system sends a signal back down each well to adjust the downhole flow-control valves and achieve those calculated production rates.

Parts of that scenario are already in play. By January, Baker Hughes had claimed two intelligent completions, both of which included downhole sensors and remotely actuated valves. The sensors provide real-time temperature and pressure information from the formation. And, Baker reported, their sliding sleeve had "performed flawlessly during more than 40 shifting cycles."

The existence of real-time sensors that can be relied upon to operate throughout the life of the well is encouraging for those awaiting the ultimate IC installation. Too, the fact a sliding sleeve performed repeatedly as billed—no small feat for a device whose seals are being moved while exposed to high differential pressures—is a critical proof of the tool's viability.

The next important step for sleeves is to be reliable in the partially open position, unlike those to date that are either fully opened or fully closed. Such a capability is necessary because it changes the simple on-off valve into an adjustable downhole choke capable of an infinite range of flow rates. The challenge of course is to create a valve than won't be eroded, or cut out, over time as half its gate or sealing mechanism is exposed to a flow stream that almost certainly contains erosive elements such as sand and salt water.

Halliburton, in alliance with UK-based PES, claims to have created such a valve, the Integrated Control Valve (ICV). And while there were difficulties in its initial installations, tests indicate the valve did indeed perform in the partially opened position. Others have said they are skeptical because only time can prove up such technology.

The subject of reliability is central to IC strategy. The failure of such a flow-control valve, or any other element in place downhole, would be economically catastrophic, since it would likely force a rig intervention that would defeat the entire goal of the IC strategy. And while they do have the potential of adding greatly to operators' bottom line through more efficient production and operating cost savings, they are not free nor easily replaced.

The technique of moderating flow as opposed to simply stopping it is also essential to maximizing IC potential. The technique allows flow from high-pressured zones to be reduced so lower pressured ones may be commingled with them. That not only makes it possible to maximize returns on investment through early production, it also eliminates costly dual completions traditionally used to gain zonal isolation to prevent cross flow.

But real-time sensors and reliable sliding sleeves are just first steps. Operators have a long wish list of IC components that service companies report to be in the research and development pipeline. Weatherford, for instance, has said it is working on downhole, real-time, multiphase flow meters that are the next logical step after pressure and temperature sensors.

The search for such devices serves the second, more elusive, leg of IC – real-time views of a producing reservoir at the formation face. By coordinating data from flow meters, pressure-temperature sensors and production logging tools permanently placed in the hole, operators will be able to obtain in real time what is referred to as 4D seismic, the actual movement of fluids through the reservoir over time.

The impact of such a monitoring capability, especially when combined with remote flow-control, is potentially immense. In water floods for instance, 4D seismic (so-called for the addition of time to traditional 3D seismic measurements) would allow operators to track fluid movement while the multiphase meter tells him flow content (percentages gas, water, oil) and rate. The computer or an intervening human could then adjust water injection as well as production rates at each zone to hugely increase sweep efficiency. 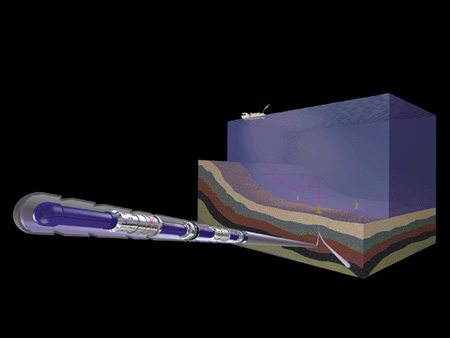 Halliburton's Surface Controlled Reservoir Analysis and Management System, better known as SCRAMS, is capable of managing downhole sensors and flow control components in real-time via electric cables from the surface.

How to exchange these signals and data is now an especially hot issue among IC developers. Operators have long used hydraulics to move things downhole. Surface-controlled safety valves, for instance, have long been a staple of the industry, particularly offshore. And though such hydraulic tools are set at relatively shallow depths and operate at low pressures, their longevity within the industry has given engineers a certain comfort level towards subsurface hydraulics.

But eventually, say most IC experts, all-electric IC systems will do away with the hydraulic-electronic interface. Electrical connections between the surface facility and downhole devices, particularly in long reaches or deepwater offsets, is indispensable: the distances are simply to great to move mechanical parts via hydraulic pressure.

Too, downhole sensors and subsea trees are already using electronics to send data to the surface so, industry experts argue, why not just make the it all electric and eliminate a potentially troublesome interface.

"All-electric provides a single penetration through the wellhead," said Jack Baker, the man named to lead Bakers recently announced IC effort, where hydroelectric generally requires two per zone. "And [all-electric IC's] simplicity and compatibility in subsea environments is too much to ignore."

All-electric or hydraulic-electric, begs the question of whether to use fiber optics or standard wiring. While fiber optics is renowned for its multi-channel feature, it has long been resisted in the oil industry as too frail and some IC designers object to it because they question its ability to carry the level of power necessary to move flow control valves.

And while only time will change attitudes, the latter objection may already be moot as Weatherford reports it has recently completed designs for a valve with much lower power requirements.

The Holy Grail of IC, the fully automated field, is probably a very long way off, due as much to operator resistance as to technical barriers, most of which require only adaptation and refinement of existing technology. Indeed, say the experts, some of essential missing IC elements are scheduled for field tests within the year. Other more complex innovations, such as permanent downhole sonic tools should be available in less than three years.

IC proponents commonly say the state of their technology is today comparable to the early days of high-angle drilling. If they are right, and given its economic potential, high-end ICs should become an industry staple in less than ten years.