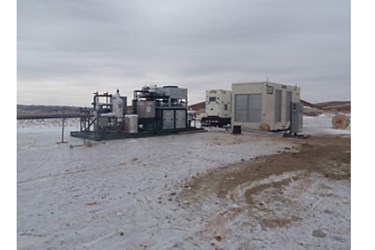 How do you meet ever-stricter flare gas capture requirements in an area with limited oil and gas infrastructure? For North American energy producer Enerplus, the answer includes innovative mobile gas capture and natural gas extraction units from GTUIT, a manufacturer in which Caterpillar is a minority shareholder.

Flare gas is a byproduct of the oil production process. In many locations, oil wells are hooked into pipelines, and the gas travels through those pipelines to facilities where it can be treated. On the Fort Berthold Indian Reservation in North Dakota’s Bakken oilfield, however, that infrastructure hasn’t yet caught up with the pace of increased production.

Now that flare gas requirements established by the North Dakota Industrial Commission are getting tougher, that’s no longer an option.

“The new rulings require oil and gas producers to meet a certain percentage of gas capture or have production curtailed to 100 or 200 barrels a day,” says Norm Robotham, the Enerplus team lead for U.S. facilities engineering. “Some of our wells can produce over 1,000 barrels daily, so that’s a significant penalty. Reducing emissions and avoiding curtailment were the key drivers in our decision to look at the GTUIT units.”

Those units, which are about the size of a semi-trailer and easily connect to an engine or generator set, significantly decrease the volume of flared gas at the wellhead, reducing the volume of volatile organic compounds released into the atmosphere. Instead, those compounds are captured as natural gas liquids, or NGLs, which can be conserved and sold on the market for later use.

For Enerplus, the potential to add a revenue source by selling NGLs represents an exciting long-term opportunity. In the short term, though, the company is focused on reducing emissions and keeping its wells operating at full capacity.

Currently, Enerplus has three GTUIT units in operation with a fourth on standby, and Robotham wouldn’t hesitate to add more if the need arises.

“It’s proven technology available at a good price point, and the units are very mobile so you can move them around as needed,” he says. “The working relationship with GTUIT has been positive at all levels, too. They’re reliable and dependable—they do what they say they’re going to do. That’s important in this business.”