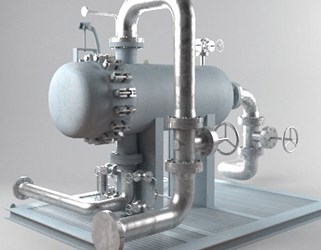 LiquiSep® technology has been implemented specifically to help separate emulsions that are not separable by conventional coalescers. Conventional coalescers are unable to provide the degree clarity associated with LiquiSep® technology due to the inability to capture and remove the most penetrating droplets that cause carry-over. LIQUISEP® can separate these dispersed and emulsified droplets from the hydrocarbon to practically nondetectable levels. Advances in the technology now permit horizontal installations, further reducing capital cost. The effluent from a typical LiquiSep® separation consist of two separate phases. One phase is a clear product hydrocarbon stream, and the second phase is a clear product aqueous stream.

Hydrocarbon systems frequently encounter aqueous contamination. The aqueous component typically exceeds the soluble limit, and accumulates within the hydrocarbon as a separate dispersed and emulsified phase. This stable emulsion is typically observed as a stable haze.

The challenge associated with conventional separation mechanisms is that they depend on capturing the droplets through impaction of the droplet on a separation medium (such a wire mesh or filter media). As the droplets become smaller, the boundary layers around such media increase in dimension to the point that the droplets are much more likely to move around the fiber rather than collide into it. The capture of such fine droplets, then, requires advances in technology to reduce such boundary layers, as well as create additional mechanisms for droplet capture.