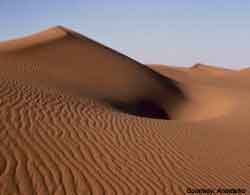 It is easy to assume that new oil in Africa comes only from the coastal basins of West Africa, but Libya, in the northeast, still has Africa's largest oil reserves. And between the "Great Jamahiriyah" and Algeria, there are some 36.7 billion bbl, far exceeding the reserves of both Angola and Nigeria.

Even with Libya emerging from isolation and Algeria at war, North Africa led the world in 1998 (the last year for which figures are readily available in terms of new field wildcats(NFWs). There was a 12% increase in wildcats in North Africa, compared with a 2% drop in Middle East and 24% drop in North America. North African NFWs increased significantly in Algeria and Tunisia while decreasing marginally in Libya and Egypt in 1998. Algeria added 30 million boe per NFW after drilling 30, and Egypt added roughly 10 boe per NFW after drilling 50.

The level of activity—seismic, drilling, and production—anywhere, is the point at which three things converge: government incentives, a country's prospectivity, and the commitment of the oil operators. The North African countries have been generally bullish on incentives in the last two years. Operators have responded as much as they can, in the light of competition for funds elsewhere. And prospectivity, especially in Algeria, is relatively good.

Algeria(Back to Top)
With Libya only now emerging from isolation, Algeria has been the focus of oil and gas activities in North Africa. With the largest store of gas in Africa (124 Tcf), it elbows Nigeria's 110 Tcf to second place; and its nearness to Europe guarantees a market. Algeria's 9.2 billion bbl reserves rank third after Libya's 29.5 billion bbl and Nigeria's 22.5 billion bbl. 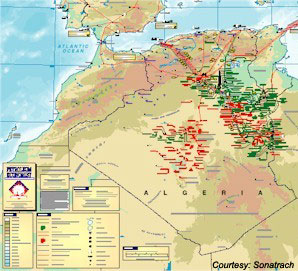 Recent exploration successes have emphasized Algeria's prospectivity and confirmed its reputation as Europe's trustworthy gas supplier in Africa. Last month, BP Amoco and Sonatrach announced they were going ahead to develop a US$2.5 billion complex of gas fields—the In Sallah fields—in the Sahara. They will supply 9 billion m3 of gas to southern Europe. BP Amoco is also working on the In Amenas gas and condensate project, based on four fields in eastern Algeria for which Amoco signed a PSC in 1998. In Amenas will produce 700 million cf/d gas and 45,000 b/d condensate and LPG.

But some of the most exciting stories in Algeria have been in regard to oil. Last September, after Elf's agreement to acquire a 40% stake in redevelopment of Arco's Rhourde El Baguel Field, the Anadarko-Sonatrach consortium awarded the next phase in the production of the Hassi Berkine Field. Since discovery in 1992, it has emerged as a huge world-class field. When it went on stream in October 1998, estimated recoverable reserves were 4 billion bbl. In September, operator Anadarko and Sonatrach, the Algerian state company, awarded a US$331 million EPC contract to Brown & Root Condor for stage two of the Hassi Berkine Nord -Sud (HBNS) production facility. The project includes a 75,000 b/d gas and oil separation train, gas injection, flowlines, wellheads, trunklines, and field-gathering stations. At completion in October 2001, it will increase capacity from 65,000 b/d to 285,000 b/d.

Sonatrach is keen on developing Ourhood, another huge oilfield, which straddles three blocks operated by Anadarko, Cepsa, and Burlington Resources. Sonatrach chairman Abdelmajid Attar, says US$1.2 billion worth of contracts may be signed this year for the development. Its share is part of the $21 billion five-year program to double oil capacity and increase natural gas output by 2004 using PSCs. The program envisages $16.4 billion for field development.

In 1999, Sonatrach negotiations for 11 exploration blocks began, and once more is luring international oil companies to unexplored areas. Majors responded by asking Sonatrach to sweeten terms and offer larger and potentially more lucrative acreage so they could justify venturing into remote desert areas with little or no infrastructure.

Companies want the existing PS model replaced with JVs that can offer longer term benefits and deliver cost reduction since both equipment and personnel can be shared with Sonatrach.

Algeria's investor-friendly, relatively new government of President Abdelaziz Bouteflika is keen on expanding the investment portfolio. The new Energy and Mines Minister Chakib Khelil, a former World Bank official, is expected to work on transforming the oil and gas industry, including reorganization of Sonatrach and the opening of non-core subsidiaries to private investors—but the state is expected to remain the majority shareholder.

Libya(Back to Top)
Libya's re-entry to the oil patch has come with more of a bang than a whimper. With oil prices higher than they have been in five years, the European energy industry has embraced the country with enthusiasm. Lundin Oil, Italy's ENI, and UK's Lasmo never withdrew during the sanction period. Libya's appeal to investors anywhere, anytime derives from three key things: