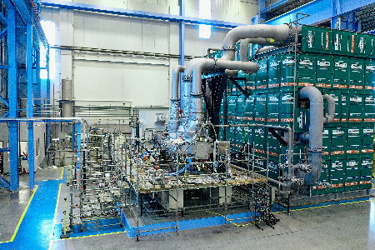 The new test stand means the Gulf Coast region now has a global manufacturer with a significant regional presence. MCO-I will be the only centrifugal compressor OEM in the region with these performance testing capabilities. The new test stand conducts PTC 10 Type 2 performance testing and mechanical running tests on small to mid-size compressors, for the oil and gas, fertilizer, methanol and other industries. As the only OEM to have a compressor test stand performing PTC 10 Type 2 testing in the Gulf Coast region, MCO-I will be able to manufacture, assemble and test exclusively within the U.S.

The localized offering means that U.S. customers will benefit from shorter project lead times, allowing for quicker time to market. Customers will be able to minimize schedule risks due to simplified logistics to site for installation and commissioning. They will also be able to receive a more timely and comprehensive explanation of shop test results and will benefit from the ability to witness shop tests close to home – lowering costs involved in traveling nationally or internationally to witness inspections and tests.

Clayton Jurica, sales manager, MCO-I, said, “Our new Gulf Coast test stand means MCO-I can now execute as a full service factory that can manufacture, assemble and test centrifugal compressors for our Gulf Coast customers. More than 90% of our customers are located within a 300 mile radius of the facility, which provides them significant advantages when it comes to new equipment manufacturing and execution and servicing machinery throughout its lifecycle. Additionally, due to close proximity to existing plants, we’ll be able to offer performance testing and mechanical runs of compressors that have been revamped and/or significantly modified, all within a tight customer turnaround schedule. We’re extremely proud to have made substantial investments in the Gulf Coast over the last few years while many others have relocated manufacturing internationally.”