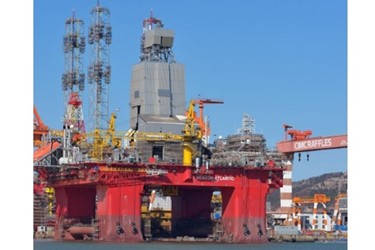 Newly built rig will drill six wells in the Norwegian sector of the North Sea.

Neptune Energy Norge AS has awarded a rig contract for six wells to CIMC Offshore AS. The contract concerns hire of the Beacon Atlantic semi-submersible drilling unit, which will be managed by Odfjell Drilling AS.

Designed for harsh environments, Beacon Atlantic will be suitable for drilling three development wells on the Duva field (formerly Cara) starting at the end of 2019. In addition, it may drill another three development wells in the northernmost part of the Gjøa field, the P1 segment. Neptune Energy Norge has options to use the rig for additional development or exploration wells.

Odin Estensen, Managing Director of Neptune Energy in Norway said: “With the contracting of this modern rig, we are on track to develop the Duva and Gjøa P1 fields, both of which are key growth assets in our Norwegian North Sea portfolio. First oil for Duva is expected by late 2020 and early 2021 for Gjøa P1.”

Beacon Atlantic is a new-built drilling rig designed to operate on the Norwegian Continental Shelf. The rig is right-sized for a combination of development drilling and exploration drilling.

Erik Oppedal, Projects & Engineering Manager at Neptune Energy in Norway, said: “Neptune Energy has high expectations for the Beacon Atlantic. The rig has 1½ derrick efficiency, allowing parallel operations and thus ensuring an efficient drilling program. We already have competent personnel present at the yard for follow-up and implementation jointly with Odfjell Drilling. Sail-away is scheduled in the summer of 2019 and the rig is expected to arrive at the first drilling location in the fourth quarter of 2019.”

About The Duva field (PL 636)
The Duva field is located 6 kilometers northeast of the Gjøa field (12 kilometers from the Gjøa platform). The shortest distance to shore is 35 km. The discovery was made in production license 636 in August 2016 by drilling well 36 / 7-4.

About The Gjøa field (PL 153)
The Gjøa field was discovered in 1989, and a PDO was delivered and approved by the Norwegian authorities in 2007. The field was developed with five subsea templates tied to the Gjøa Semi-Submersible for processing and export. Production started in 2010. Oil is exported by pipeline to Mongstad and gas by pipeline to St. Fergus in the UK. The Gjøa P1 segment is located in the northern part of the Gjøa field.

About Neptune Energy
Neptune Energy is an independent global E&P company and, having completed the acquisition of the exploration and production business of the ENGIE group in February 2018, is now active across the North Sea, North Africa and Asia Pacific. The business had production of 160,500 net barrels of oil equivalent per day in the first three quarters of 2018 and 2P reserves at 31st December 2017 of 542 million barrels of oil equivalent. The Company, founded by Sam Laidlaw, is backed by CIC and funds advised by Carlyle Group and CVC Capital Partners.