The U.S. To Witness The Highest Liquefaction Projects Starts In North America By 2026 Due To Russia-Ukraine Conflict, Says GlobalData 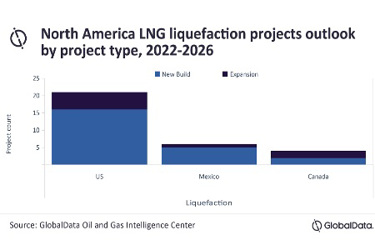 The US is set to drive North America’s upcoming liquefied natural gas (LNG) liquefaction projects count by 2026, contributing around 68% of the total project starts during 2022 to 2026, says GlobalData, a leading data and analytics company. As a result of Russia’s invasion of Ukraine, upcoming LNG exports projects in the US have received a massive boost as European and Asian buyers are increasingly looking towards American LNG to reduce their reliance on Russian gas.

GlobalData’s latest report, ‘Global LNG New-Build and Expansion Projects Outlook to 2026’, reveals that the US already dominates the Americas region and upcoming LNG liquefaction projects will add a capacity of 196 million tonnes per annum (mtpa) between 2022 and 2026.

Sudarshini Ennelli, Oil and Gas Analyst at GlobalData, comments: “Of the 21 projects that are expected to start operations in the US during the 2022 to 2026 outlook period, 21 would be new build projects and the remaining are expansion projects.”

The largest upcoming project in the US is the Driftwood Phase I with a capacity of 16.6 mega tonnes per annum (mtpa). Currently, the project is under construction and is expected to start operations by 2026 with Driftwood LNG LLC as the operator. Tellurian, the owner of Driftwood LNG, has definitive agreements in place with TotalEnergies subsidiaries Vitol, and India’s Petronet to supply LNG produced from the project.

Rio Grande Phase I is another major upcoming project in the US with a capacity of 16.2 mtpa. The Final Investment Decision (FID) of the project was delayed and is now targeted in the second half of 2022. The lack of adequate long-term LNG contracts seems to be the key reason for the delay of the FID. However, the owner of the project, NextDecade, has recently signed a 20-year agreement with Chinese company Guangdong Energy Group, boosting the chances of the FID. NextDecade now has three LNG supply agreements in place for the project.