Total Divests Assets In The UK To Petrogas

Formerly owned by Maersk Oil, these assets are located in the Eastern North Sea and include the fields listed below (see table). The overall consideration for this deal amounts to 635 million dollars with an effective date of January 1, 2019. The transaction remains subject to approval from the relevant authorities and is expected to close in December 2019.

“This transaction is consistent with our portfolio management strategy, aiming at lowering our break-even point by optimizing capital allocation and divesting high technical costs assets. Our primary objective is to maintain the organic break-even before dividend below $30 per barrel and high-grading our portfolio will help us achieve this” commented Arnaud Breuillac, President Exploration & Production at Total.

Following the Maersk Oil acquisition in 2018, Total became the second largest operator in the North Sea, which is one of its core areas. The region is home to some of the Group’s current major projects: Culzean, which started up last month in the UK, and Johan Sverdrup in Norway with first oil planned later this year.

The assets divested of in this transaction are as follows: 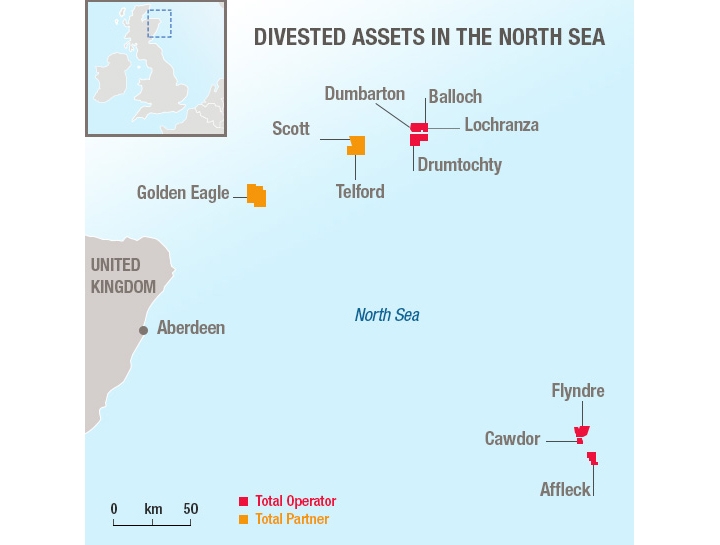 Total In The United Kingdom
Total is present across the energy value chain in the UK. It has been present in the country for over 50 years and employs over 2,000 people.

Upstream, Total is one of the country’s leading oil and gas operators, with equity production of 179,000 boe/d in 2018. It principally comes from operated offshore fields in three major zones: the Alwyn/Dunbar area in the Northern North Sea, the Elgin/Franklin area in the Central North Sea, the Laggan-Tormore area in the West of Shetland area.

Downstream, Total is one of the UK’s largest suppliers of gas and electricity to businesses and the public sector. The Group is also present in refining through the Lindsey Oil Refinery in Lincolnshire, with a capacity of 110,000 barrels per day, and in the marketing of petroleum products including lubricants, aviation fuel, bitumen and specialty fluids.

About Total
Total is a major energy player that produces and markets fuels, natural gas and low-carbon electricity. Our 100,000 employees are committed to better energy that is safer, more affordable, cleaner and accessible to as many people as possible. Active in more than 130 countries, our ambition is to become the responsible energy major.