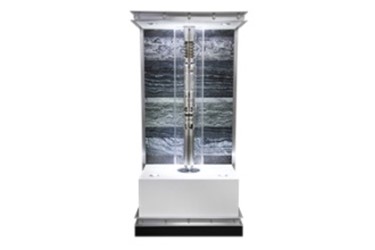 Cerritos, CA (PRWEB) - Upwing Energy, an artificial lift technology company, will showcase its Subsurface Compressor System™ (SCS) for gas wells at its first Shale Insight conference from October 23-24. This industry leading event will take place in the heart of the Marcellus and Utica shale gas plays at the David L. Lawrence Convention Center in Pittsburgh, Pennsylvania.

The Upwing SCS is a high-speed downhole compressor system with a compressor rotor levitated by magnetic bearings and driven by a permanent magnet (PM) motor. The system increases gas production and recoverable reserves by enabling greater drawdown close to the well perforations. A detailed cutaway model of the SCS will be displayed at Upwing Energy’s booth #422 in Hall A.

“Upwing’s SCS can reverse the vicious cycle of liquid loading, which causes decreased gas production prematurely in unconventional wells, and instead, can create a virtuous cycle of increased gas and liquid production,” said Herman Artinian, President and CEO of Upwing Energy. “The Upwing team is in the process of launching new trials across different U.S. shale plays to focus on the reservoir’s production response to a lower bottomhole flowing pressure, before rolling out the product commercially.”

Liquid loading occurs when liquid blockage creates backpressure in the wellbore or pore space in the formation, and dramatically reduces gas production, resulting in reduced gas velocity and leading to more liquid accumulation over time. Existing artificial lift systems cannot remove liquids completely in both the vertical and horizontal sections of the well.

The SCS has demonstrated that it can lower the bottomhole flowing pressure below the abandonment pressure, increasing the velocity of the gas stream, which enables more effective liquid sweeping in the vertical and horizontal sections of the well. The lower suction pressure at the intake of the SCS also enables the gas stream to absorb more liquid in the wellbore and overcomes the capillary effects to remove blockages of condensate within the formation to produce more gas and condensates.

Shale Insight is the nation’s leading forum for public-private dialogue on shale development. It brings together industry executives, innovators and public officials to discuss the most pressing energy issues, market trends and emerging solutions. For more information about the event, visit http://www.ShaleInsight.com.

About Upwing Energy
Upwing Energy, Inc. (“Upwing”), headquartered in Cerritos, Calif., provides the most reliable, available and retrievable artificial lift technology that increases the production and recovery of hydrocarbons from conventional and unconventional wells. The company is an innovative offshoot of parent company Calnetix Technologies, which is a recognized leader in high-speed rotating systems for a wide variety of industries. For more information, please visit http://www.upwingenergy.com.