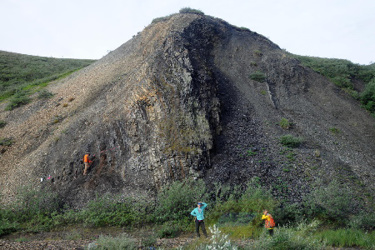 The U.S. Geological Survey (USGS) estimates 1.4 trillion cubic feet of natural gas resources lie undiscovered in the portions of the Alaska North Slope located to the west of the National Petroleum Reserve-Alaska (NPR-A), according to a newly released assessment that included a mix of federal, state and Alaska Native lands. The analysis underlying this assessment also found that geologic conditions in the area are too hot to support oil, so no assessment was made of oil resources in this study.

On Alaska’s North Slope, the USGS studies geologic hazards and resources, climate change, wildlife and ecosystems, surface and mineral mapping, water quality and foundational geology. This assessment is one of a series of USGS oil and gas assessments on the North Slope mandated by Department of the Interior Secretarial Order 3352, which was issued in May 2017.

“This new assessment shows that we still have much to learn about Alaska’s North Slope,” said Sarah Ryker, USGS Associate Director for Energy and Minerals. “There has been speculation for decades that this area west of the NPR-A might be rich in oil. However, the limited geologic data we have indicate the rocks assessed contain modest natural gas, but likely no oil. That finding helps the Bureau of Land Management, the U.S. Fish and Wildlife Service, the State of Alaska and the Alaska Native Corporations understand the natural resources that they manage.”

“This study suggests that oil deposits were formed in the area and were transformed into gas when the area was heated to high temperatures,” said USGS scientist Dave Houseknecht, who led the assessment.

The resources estimated in this report are undiscovered, technically recoverable conventional resources. Conventional resources are those that have collected into discrete accumulations that can be extracted using traditional techniques. These are in contrast to continuous resources, which are those spread throughout a rock layer and typically require enhanced recovery techniques, such as hydraulic fracturing.

Undiscovered resources are those estimated to exist based on geology and other data but have not yet been proven to exist by drilling or other means. Technically recoverable resources are those that can be extracted using today’s standard industry practices and technology. This is different from reserves, which are those quantities of oil and gas that are currently profitable to recover.

The new assessment of Alaska’s North Slope west of the NPR-A may be found here. To find out more about USGS energy assessments and other energy research, please visit the USGS Energy Resources Program website and follow us on Twitter.