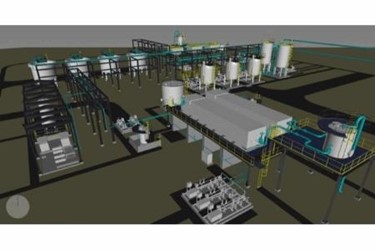 Veolia, through its subsidiary Veolia Water Technologies, has been chosen by contractor Tecnicas Reunidas to engineer and procure a wastewater treatment plant for the Jazan Refinery and Terminal in Saudi Arabia. Jazan Refinery and Terminal, wholly-owned and operated by Saudi Aramco, is a new refinery and terminal in the Kingdom’s southwest with an expected capacity to process 400,000 bpd of Arabian Heavy and Arabian Medium crude once commissioned in 2017.

Saudi Aramco is the state-owned oil company of the Kingdom of Saudi Arabia and a fully integrated, global petroleum and chemicals enterprise. Vincent Caillaud, CEO of Veolia Water Technologies Oil & Gas, said: “Veolia is privileged to have a long-standing relationship with Saudi Aramco, built on our strong local presence and technological excellence. We are very happy to have been chosen by and to collaborate with Tecnicas Reunidas on this major project which will help meet the Kingdom’s energy demand and also export high-value fuels to international markets.”

With operations in Saudi Arabia for more than 30 years, Veolia operates city water management, waste and cooling urban network services. In 2008 in particular, the Group won a contract with National Water Company (NWC) to improve the overall performance of the water and wastewater services used by nearly 6 million people in the Saudi capital, Riyadh. This project greatly improved the drinking water network performance (now 82%), connected more than 100,000 households to the sewerage system, and improved customer management (now 85% customer satisfaction).

Particularly involved in desalination projects in the Kingdom, Veolia also supports numerous industrial customers, especially in the oil, gas and mining sectors, to help them improve their environmental performance. Veolia has worked on several projects for Saudi Aramco, including a desalination plant which supplies the Sadara petrochemical complex built by Dow Chemical and Saudi Aramco in Jubail City. Veolia’s specialized subsidiary SIDEM, present in Saudi Arabia since 1979, has also built the desalination plant for the city of Al Khobar in the Eastern Province, near the Arabo-Persian Gulf. In 2010, Sidem had already built in Jubail City one of the largest and most efficient desalination plants in the world. This 800,000 m3 per day capacity plant uses Veolia's multiple-effect distillation (MED) process, which consumes three times less energy than rival processes.

Technological details:
The 1,000 m3/h biological treatment package will include state-of-the-art Veolia proprietary technologies such as AnoxKaldnes™ Moving Bed Biofilm Reactor (MBBR), Actiflo® and Multiflo™ high-rate clarifiers and Hydrotech™ Discfilters. Oily water treatment will be achieved by combining two Veolia technologies developed specifically for the Oil & Gas market: the MPP TiPSS Tilted Plate Interceptor (TPI) and the Whittier Power Clean® technology, which is a nutshell filter media, designed for effective removal of oil and suspended solids. Finally, Multiflo and various chemicals will be used in the third treatment step to remove metals. The deoiling and metal removal treatment steps will both have a capacity of 550 m3/h.

About Veolia
Veolia group is the global leader in optimized resource management. With over 174 000 employees worldwide, the Group designs and provides water, waste and energy management solutions that contribute to the sustainable development of communities and industries. Through its three complementary business activities, Veolia helps to develop access to resources, preserve available resources, and to replenish them.