In the aftermath of the Deepwater Horizon oil spill in the Gulf of Mexico two years ago, various strategies were deployed to prevent 4.9 million barrels of light crude oil from fouling the waters and reaching the shores. A team of Lawrence Berkeley National Laboratory (Berkeley Lab) researchers found that nature also played a role in the dispersal process as marine microbial communities responded to the oil plume that made its way from the wellhead at a depth of 5,000 feet to the surface of the water.

“There was oil on the surface and oil below, but no oil in between,” said microbial ecologist Terry Hazen, former head of the Ecology Department at Berkeley Lab and now holder of the University of Tennessee-Oak Ridge National Laboratory Governor’s Chair. In a report published a few months after the oil spill, Hazen’s team reported that the microbes in the water were partly responsible for the oil’s disappearance. While several studies have since confirmed that various microbes played a role in the dispersal of the oil in the Gulf, understanding the composition of the microbial community and the roles of its members has not fully achieved until now.

To learn more about the microbial community’s response to the oil spill, researchers led by Berkeley Lab senior scientist Janet Jansson availed themselves of the expertise and resources at two of the Lab’s national user facilities, the U.S. Department of Energy Joint Genome Institute (DOE JGI) and the Advanced Light Source (ALS). The work done by the Lab’s disaster response team demonstrated Ernest Lawrence’s pioneering vision of team science. The findings, published in two separate articles, track a series of microbial species dominating the community in the waters at various time points to remove different fractions of the oil.

As reported in an article published online June 21, 2012 in The ISME Journal, the team describes using a combination of genomics techniques to study the way the microbes responded to the influx of oil. They focused on the community’s expressed functional information or metatranscriptome. In addition, they isolated single cells to identify the predominant microbial members in the deep ocean oil plume. Using the latter technique, they were able to assemble a draft genome of what they say is the first deep-sea, oil-eating bacterium from a single cell. 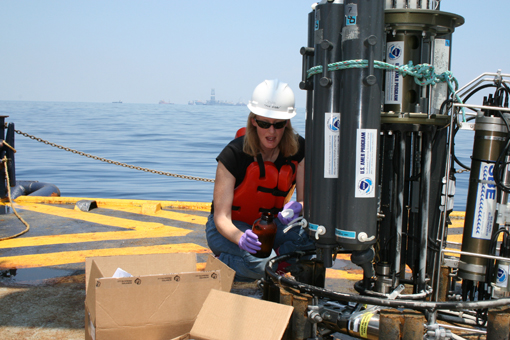 In a program funded by the Energy Biosciences Institute (EBI), Jansson’s postdoctoral fellow Olivia Mason collected deep water samples from the oil plume that appeared during the Deepwater Horizon spill 1.5 kilometers and 11 km from the wellhead and the samples were analyzed by a team of scientists back at the Berkeley Lab. Mason extracted DNA and RNA from the samples and at the DOE JGI, researchers led by Microbial Program head Tanja Woyke and Metagenome Program head Susannah Tringe subjected the samples to deep sequencing approaches, generating billions of bases of data for each sample. Mason analyzed the resulting metagenomic (DNA) and metatranscriptomic (RNA) sequences to reveal genes for functions such as hydrocarbon degradation. Data analysis revealed an abundance of genes involved in the degradation of alkanes, as well as genes involved in degradation of aromatic compounds. A separate group under DOE JGI Microbial Program head Tanja Woyke worked to isolate and sequence three cells of Oceanospirillales bacteria, two of which they were able to co-assemble into a draft genome.

Mason then searched against a database of microbial proteins known to be involved in the pathways for breaking down hydrocarbons. The results suggested that the microbes responding to the plume were predominantlyOceanospirillales bacteria, able to break down cyclohexanes.

Jansson said that the results suggest a succession of microbes acted on the oil spill, degrading different fractions. “I think what we’re seeing are these waves of community members and this is known to happen in the ocean. We probably have a bloom of alkane degraders that were present when we sampled early in the spill history. In later expeditions they found methane degraders or propane degraders suggesting that there was a succession in the community and their properties,” she said. 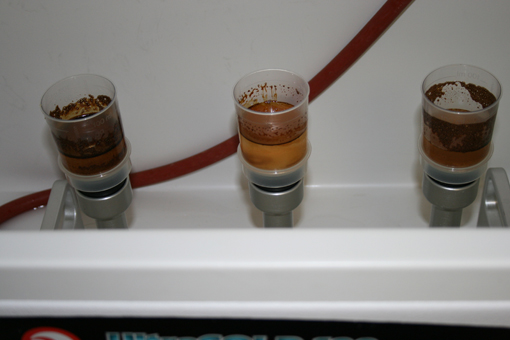 Adding credence to their hypothesis are the results of a simulation Jansson and her colleagues reported in a separate study published May 23, 2012 in Environmental Microbiology. The researchers modeled the oil plume scenario using uncontaminated water from the Gulf that was supplemented with oil collected during the spill, and dispersants. The team employed DNA sequencing at the DOE JGI to monitor the composition of the microbial community that was responsible for breakdown of the hydrocarbons. The distribution of “flocs,” clusters of microorganisms, oil, and oil degradation products were also studied with the help of Berkeley Lab’s Advanced Light Source, a DOE Office of Science-supported facility that  offers a beamline -- ALS Infrared Beamline 1.4 -- that produces infrared spectra ideal for studying living bacteria individually or in small groups. “The aim was to enrich natural deep sea bacteria from the Gulf of Mexico on oil in the laboratory so that we could study them,” she said, “and the results were the same as what was seen in nature.” In addition, they successfully cultivated an oil-degrading Colwellia bacterium from the oil enrichments that had sequence similarity to those reported from the oil plume.

However, as the Oceanospirillales microbe that was sequenced using single cell sequencing remained uncultivated, Jansson said that further studies such as those conducted in the second study will have to wait until an isolate can be obtained. In the meantime, one direction the researchers have taken is to conduct a metagenomic analysis of sediment samples collected near the oil rig both during and after the Deepwater Horizon spill and of sediment samples from natural oil seeps.

Jansson said that combining the metagenomic, metatranscriptomic and single-cell sequencing techniques accessed through the collaboration with the DOE JGI provided a uniquely comprehensive perspective on the findings. “When we compared the RNA to the DNA we saw enrichment in the same kinds of genes for certain compounds. For example, the genes for degradation of cyclohexane were very abundant in the plume and they were being expressed. It was essential to have the expression data because without that, the DNA might be there but we’d be at a loss to determine whether there was any relevant functional activity,” she said. “This shows what’s really going on when and where you take your samples. We found that the genes were there, that specific classes of genes were highly expressed, and then they were also found in the single cell that we sequenced—all together it made for a really coherent story that can serve as a model for future studies.”

About The U.S. Department of Energy

DOE's Office of Science is the largest supporter of basic research in the physical sciences in the United States, and is working to address some of the most pressing challenges of our time. For more information, visit science.energy.gov.